The history of Kronhuset

Kronhuskvarteret, The Kronhus quarters: A stones throw from Gustaf Adolf Square is the Kronhuset quarters. This is the location os Gothenburgs oldest non-religious building, the proud Kronhuset. The building of Kronhuset was started in 1642 by order of the War Office in Stockholm, and was completed in 1654. The original purpose of Kronhuset was as storage facilities for artillery and grains for the military.

The lower buildings of the quarters, Kronhusbodarna (the Kronhus sheds), were built after the big city fires in the mid-18th century.

Kronhusbodarna were restored in the early 1970’s, and now house crafts, including glass, ceramics, leather, chocolate and watches.

Kronhuset, originally Giötheborgz Tyghuhs, is a large, red brick building in Västra Nordstaden in Gothenburg. The building was built in 1642-1654, inspired by Dutch architecture, and is Gothenburg’s oldest non-religious building. The original drawings were possibly created by royal architect Simon de la Vallée. Kronhuset was originally used to store military materials such as cannons and uniforms but it also held the military grain supply. Before Kronhuset was built, the site was the location of Gothenburg’s oldest cemetery.

King Karl X comes to Kronhuset. The parliament was summoned in Gothenburg on January 4th 1660 by King Karl X Gustav, and Kronhset served as Hall of State. Part of the bottom floor was decorated with benches dressed in black fabric, and even the wlls were covered in the same fabric. King Karl X Gustav suddenly passed away in the Torstenssonska palace, and four year old Crown Prince Karl was proclaimed king of Sweden on March 1st. The first ever jester’s performance Too Young to be King takes place in te midst of this historic event.

The Kronhuset quarters went down in flames in 1746 and 1758 and all of the buildings were destroyed, except Kronhuset itself.

December 9th 1927, ownership of Kronhuset was transferred from the state to the city of Gothenburg, to be used as a museum. After extensive renovations, the Hall of State of Kronhuset was re-inaugurated by King Gustav VI Adolf on May 17th 1957. The renovations cost SEK 1 million and was funded through donations. Kronhuset is a listed building since October 24th 1968. Higab owns the building and GWO, the Gothenburg Wing Orchestra, rents the house since 1998. The premises and the beautiful Hall of State is mainly used as a concert venue. Visit GWOs 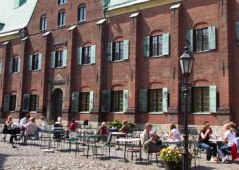 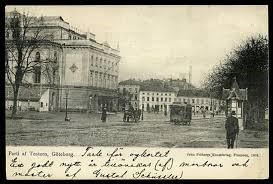